A dense German sponge or yeast dough cake with a vanilla pudding buttercream filling and a caramelized almond topping.

What is a Bee Sting Cake?

Bienenstich (bee sting) is one of the most well-known traditional German cakes, that is prepared in a sheet cake form. Though it can be considered a classic, there is no official recipe, but instead there are countless tasty variations, though every house wife has her own secret favorite.

The base for the cake can be a yeast dough or a regular sponge mixture. Both variations however are filled with a tender pudding cream and have a crunchy caramelised side of a sugar-almond mixture.

How is Bee Sting Cake called in German?

Listen to this audio file to hear how to say "Bienenstich" in German.

The name “Bienenstich” has a great myth behind it. According to the myth, there was a great fight in 1474 between inhabitants of the cities Linz on the Rhein and their neighbouring city Andersnach. This fight was set off by emperor Frederic III., who transferred the Rhein custom fees from Linz to Andersnach. This made the people of Linz angry, and they decided to attack those in Andersnach in the early hours of the morning.

Two young boys from Andersnach happened to be walking along the town wall at this time, eating honey from a bee hive hanging close by. As they saw the attackers they threw the bee hives at them. Chased by swarms of bees, being stung as they ran, the people of Linz fled. The people of Andersnach celebrated. In honour of their victory, they served a particularly delicious cake, which was named after the genius trick “Bienenstich” (bee sting). 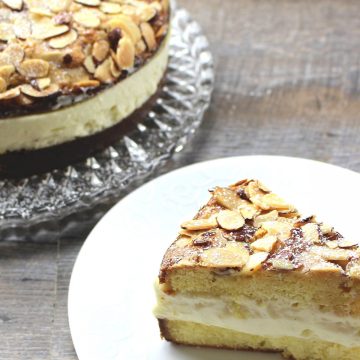 You can use blanched or unblanched almonds slices for this recipe. Make the cake a day ahead before serving. It tastes best the second day.