A variation of cold cuts served with pickles, mustard and radish.

How is a Bavarian Snack Board called in German?

The delicious snack is either called “Brotzeitbrettl” or “Jause”. “Brettl” is the Bavarian word for “Board”.

Listen to this audio file to hear how to say "Brotzeitbrettl" in Bavarian German.

Brotzeit literally translated means “Bread time”. This traditional savory snack is native to Bavarian and Austrian cuisine and is also knows as “Jause”.

The tradition of the “Brotzeit” has developed from the everyday life of farmers in Bavaria. Between the morning barn work and working on the field, it was served as a second hearty breakfast. It included bread, sausages, cheese and a glass of milk.

Today a “Brotzeit” is usually enjoyed as dinner or lunch and is a very popular dish in German beer gardens.

A Bavarian “Brotzeit” is one of the best choices for your German inspired party.

You can plan it as a large table filling spread or as a small appetizer combined with a tasting of German beers. 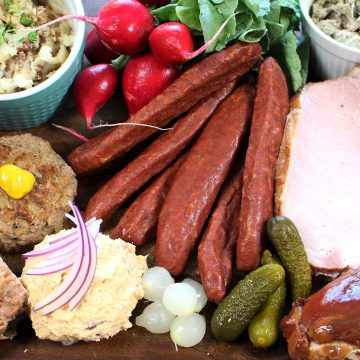 Serve on a wooden board or platter with fresh pretzels and homemade German rustic bread.

Shopping Tip: There are several online shops who specialize in selling Bavarian cold cuts and cheeses for an authentic German “Brotzeit”.