The cake consists of decadent delicious moist chocolate cake layers spiced up with Kirschwasser (German cherry brandy) and is filled with Morello cherries and a luxurious amount of whipped cream. The dark chocolate shaving decoration and the cherry garnish on top of the cake give the cream cake it´s signature look.

How Is Black Forest Cake Called in German?

Black Forest Cake is called "Schwarzwälder Kirschtorte" in German. "Torte" is the German name for cakes with cream fillings.

How To Pronounce Schwarzwälder Kirschtorte?

Schwarzwälder Kirschtorte: Who doesn’t know it? Creamy and fruity with a wonderful fluffy base – this dream cake makes many people swoon. Next to the cuckoo clock and Black Forest ham, it is the beloved showpiece of the Black Forest.

Its distinctive, unique taste of Black Forest cake is created by adding “Kirschwasser”. Kirschwasser is a strong German cherry brandy. The kirsch does moisten the chocolate layers and/or flavor the cherry filling. If you find a Black Forest cake recipe that calls for cherry liqueur or simple syrup stay away as it has nothing to do with the original recipe.

According to legends there are many versions of how the cake got it´s name and who invented it.

Why is it called Black Forest Cake

These three theories of the origin of the cake recipe name are the most popular ones:

Who invented the Schwarzwälder Kirschtorte?

People from the Black Forest are obviously certain, that it was created somewhere in the hills of the Black Forest. The most delicious cherries grew there, from which the amazing Schwarzwälder Kirsch cherry brandy is made. The combination of cherries, cream and kirsch was known since many centuries in the South of the Black Forest, but not in the shape of a cake, but as a dessert. Boiled cherries were served with cream and sometimes kirsch was added as a flavoring.

According to research conducted by the city archivist of Tübingen Udo Rauch circumstantial evidence points towards the fact, that a baker from Tübingen Erwin Hildenbrand created the Black Forest Gateau in early 1930 in the Café Walz in Tübingen. A photograph with the date of 1936 written on it shows the baker baking the Black Forest gateau.

In 1934 the Black Forest Gateau was mentioned in writing for the first time. At this point it was already well known, especially in Berlin, as well as in fancy cake shops all over Germany. In 1949 it was only on place 13 of the most well-known cakes in Germany. After that its popularity levels increased rapidly. Today it is the most well known cake from Germany and is famous almost everywhere in the world. But some countries exchanged ingredients and replaced the alcohol.

How To Make The Famous Cake

If you look at the layers and the decoration you might be a bit intimidated if you are not an experienced baker. But I can assure you, the cake is way easier to make than you might think. Check out these tips before you start with the recipe.

A little trick is, like with all cream cakes, to bake the cake layers the day before you want to assemble the cake. This gives you the peace of mind that the chocolate cake layers will have cooled completely before filling. This also guarantees that you will not stand in the kitchen for several hours on one day and makes the cake creation an easy experience.

You might be surprised about the amount of sugar used in the recipe. The whole cake only calls for 1 ½ cups of sugar in total which is less than you might be used to in American recipes. 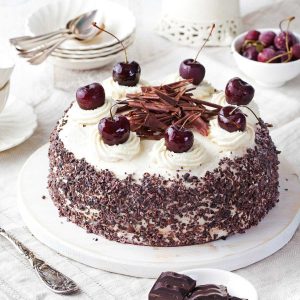 To Moisten the Cake Layers (optional)

Best if you allow cake to rest for about 4 hours or overnight
in the fridge without a plastic cover.

Yield: 1PieceCalories: 867kcalCarbohydrates: 94gProtein: 10gFat: 50gFiber: 5gSugar: 63g
Tried this recipe?Let us know how it was!

Use white chocolate for a modern, festive variation of this cake for weddings or other celebrations.

What is the difference between chocolate cake and black forest cake?

What is the taste of Black Forest cake?

Black Forest cake tastes like the perfect combination of chocolate, cherries and whipped cream. The traditional addition of kirsch gives the cake a boozy flavor.

Traditionally Black Forest cake is made with Kirschwasser, a strong German cherry brandy. But you can make the cake without kirsch and switch the kirsch of cherry juice. Usually German cakes don´t add simple syrup to their cakes.

What country is Black Forest Cake from?

The cake got invented in Germany. Black Forest is a region in the Southern part of Germany, called Schwarzwald in German.

What Can I Use instead of Cherries in Black Forest Cake?

Even cherries are the traditional choice for the cake, strawberries and raspberries are a wonderful swap for cherries.