This popular cheese and leek soup with ground meat is delicious comfort food that everybody loves. Let me show you how fast you can make this tasty German soul food.

The crowd pleaser soup is very easy to make and is a filling main course at any time of the year but especially in the colder seasons.

How is this creamy, cheesy soup with leek and ground beef called in German?

The low carb soup is called either "Lauch-Hackfleisch-Suppe" in German speaking countries.

What is the German word for soup?

Soup is called "Suppe" in Germany.

How to pronounce "Suppe" in German?

Listen to this audio file to hear how to say "Suppe" in German.

Leek: You can find fresh leek stalks in almost every supermarket. Most commonly it is located where the fresh herbs and cabbage is. Sometime leek has dirt between the leaves. In this case cut the stalk half way lengthwise and rinse it under running water. If it is not visible dirty you can cut it into slices and rinse them well in a strainer.

Ground Meat: I used lean 93/7 ground beef in this recipe but German recipes often call for ground pork. Alternatively you can also use other ground meats like bison, turkey or chicken.

Shredded Cheese: I personally like to use a blend of cheddar and Swiss cheese, but you could also conveniently grab just a bag of a Mexican cheese blend.

Onions: I did not chop the onion very finely as it will cook down anyways. But if you prefer you can cut the onion finely, but I would not recommend exchanging the fresh onion for onion powder as it will alter the taste of the soup.

If you never tried leek, you are not the only one…

If you never heard of leek you are not alone. The first time I wanted to make this soup in the US the checker asked her to colleague what the name of vegetable to find in her code list, the colleague only shrugged and asked another co-worker. But this lady also did not know how it was called. The three looked at me for an answer, but I did not know the English word for Lauch as it is called in German. We all had a good laugh and quickly checked the phone for the translation. Luckily there were not many people in the shop, so nobody got held up. 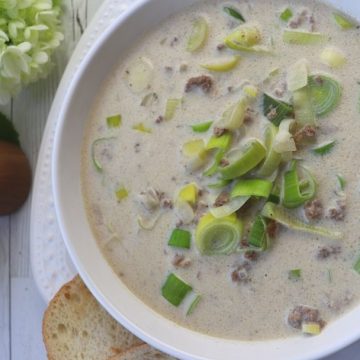 For the soup you only want to use the lighter green part of the leek, not the dark part at the top. To make this soup keto friendly cut the amount of leek and cream cheese into half. A portion of the soup will then have less than 10 net carbs.

More recipes you may enjoy