If you ever were in a German restaurant it is almost a sure thing that you saw this dish on the menu. Germans love salads in all kinds of variations.

In the course of history, the salad had its ups and downs in popularity. In ancient Greece, it was a great skill, to know how to mix and spice a good salad. Along with cabbage and chard, it was an important part of Greek nutrition.

The targeted growing began in middle Europe around the time of Carl the Great. In monastery gardens, it was planted and then from there sent on to the courts.

Up into the 20th century, salad was much less recognized and mostly thought of as a “poor man’s food.” A good piece of meat was usually preferred, since it was filling and was an indicator of wealth.

Especially at time of war or hunger, sweets and fatty foods were especially sought after – so the most expensive item on a menu was a pot of lard.

Only later was salad recognized as a valuable food product, and became popular. Even around the mid-20th century, still only served as a side dish, today it can enjoy its existence as a main dish after all.

How is a Salad Platter called in German?

To order a salad platter in a German restaurant you would ask for a "Salatplatte" or "Salatteller".

German Salad platter also known as “Bunte Salatplatte” is a German classic. It is a very popular dish in restaurants and homes.It is light fresh and very satisfying.

It consists of several types of leafy, grated or chopped salads on one plate which are separately dressed. Sometimes it has the addition of hard boiled egg slices and potato salad.

Listen to this audio file to hear how to say "Salatplatte" in German.

Listen to this audio file to hear how to say "Salatteller" in German. 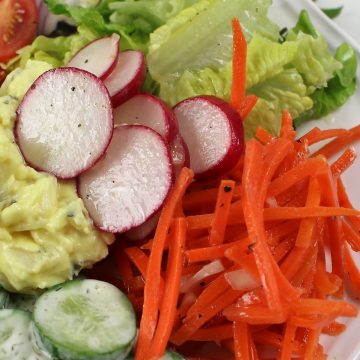 Serve the salad with some homemade bread or rolls.

Add some chicken strips or tuna to make it a more hearty and filling meal.