How is Vanilla Sauce called in German?

Vanilla Sauce is called either “Vanillesoße” or “Vanillesauce”. The character “ß” resembles two “ss” in German.

Listen to this audio file to hear how to say "Vanillesoße".

Making vanilla sauce yourself is very easy, you just need to follow a few tips.

Generally speaking, an egg-based custard is made, that is aromatised with vanilla. The only challenge there is binding the sauce. The egg mass cannot reach a temperature higher than 78°, otherwise it will curdle too much.

The binding will begin at around 60°. If you are binding cream with egg, then in German cuisine you would say “zur Rose abziehen”. This means the following: The best way to make it is by putting the cream base into a metal bowl and onto a hot bain-marie (pot-in-pot waterbath). After that you add the egg slowly, this works best if it is mixed with sugar, while stirring constantly. Now the mass has to be stirred over the bain-marie until the binding is perfect.

This can be checked with a trick. You dip a wooden cooking spoon into the mass and blow onto the back of the spoon. If the mass gets creased, and looks similar to a rose, then the cream is finished.

This undertaking is theoretically easy, but it does need a bit of patience.

If you prefer a quicker way, then you can also put the pot on the stove. It is important to keep a low heat when working. This needs a bit of experience however as the egg can curdle quickly. Another secret tip for this, using a magic wand can usually save the egg mass in case it starts to curdle. 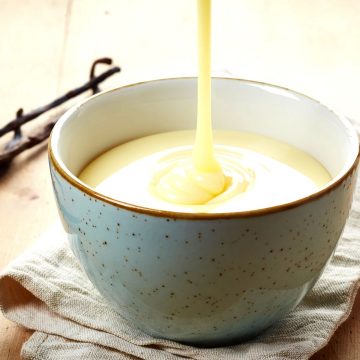 Vanilla sauce is added to many sweet dishes and cakes in Germany.

Traditionally adding a homemade vanilla sauce to apple strudel, Dampfnudeln, Kirschmichel, waffles, Germknödel and other sweet delicacies is an absolute must.

Real vanilla beans are quite expensive. Before you discard your vanilla bean next time after removing the delicious seeds, follow the recipe below and make your own homemade vanilla sugar – an essential ingredient in German (Christmas) baking. Even if you use the seeds for a recipe you can use the scraped out vanilla bean to make vanilla sugar.