This German specialty is a kind of sausage loaf.

Leberkäse has been produced in Bavaria for over 200 years and is a classic in the German cuisine. It is also referred to as “Leberkas” or “Fleischkäse”.

Elector Karl Theodor brought his own butcher to Bavaria with him over 200 years ago. The butcher created these tasty sausage loaves from hacked up pork and beef, which were then baked in bread forms.

The original Bavarian “Leberkäse” didn’t contain any liver (Leber), which is still the case today. This wasn’t the case outside of Bavaria, where there were stil guiding principles in place from the German food book for meat and meat production that stated that “Leberkäse” had to have a certain amount of liver in it.

Some argue, that the name “Leberkäse” originally came from the addition of liver to the recipe. But the name actually goes back to the old German stem “Lab” meaning loaf and “Kasi” meaning “mass”.

How is Liver Cheese aka Bavarian Sausage Loaf called in German?

The delicious dish is called "Leberkäse" in German or "Leberkas" in Bavarian dialect.

How to pronounce "Leberkäse" and "Leberkas"?

Listen to this audio file to hear how to say "Leberkäse" and "Leberkas" in German.

Leberkäse is a meat dish loved by many in southern Germany and Austria.

It looks like a pink meatloaf with a golden crust and is made from ground meat and a special spice mix.

Eaten warm as a main meal or snack and as cold cuts for “Abendbrot” (German dinner) – the classic from Bavarian cuisine is literally on everyone’s lips.

It is especially loved cut into finger thick slices and served warm in a crispy bread roll. The “Leberkassemmel” is one of the most popular lunch ideas for on the go. 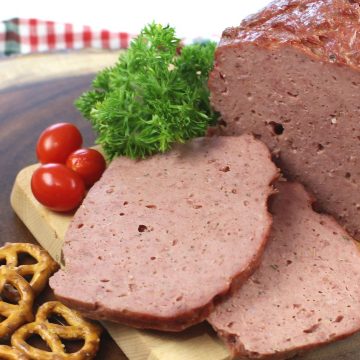 “Leberkäse” can be eaten as cold cuts on bread or warm with a side dish or in a crispy roll. Traditional sides are potato salad, fries or fried potatoes.

There are several recipes using “Leberkäse”. One popular dish is “Strammer Max”, a slice of “Leberkäse” served on a slice of bread and topped with a fried egg.

Guten Tag, I'm Angela,
Herzlich willkommen to our German food lovers family. I am so happy you are here! I love share my favorite authentic German recipes with you and tell you about some about my homeland Germany.