The Munich “Weißwurst” or "Weisswurst", (White sausage) is a real Bavarian speciality and was created in Munich by a butcher called Sepp Moser in 1857 by accident.

Bavarian White Sausages are considered to be a breakfast sausage. Weißwürste are quite popular, especially during Okoberfest in Munich.

Weisswürste are very perishable and should be eaten soon after being cooked, as it contains no preservatives.

How are White Sausages called in German?

How to pronounce "Weisswurst"?

Listen to this audio file to hear how to say "Weisswurst" in German.

How to Cook Bavarian Sausages? 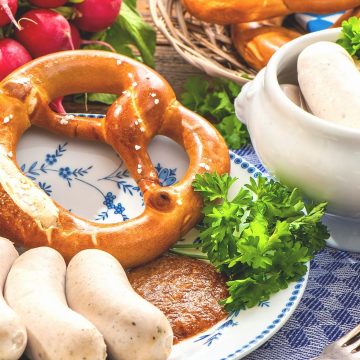 How to Serve Bavarian White Sausages?

Enjoy these tasty Bavarian sausages with a homemade soft pretzel, some sweet Bavarian mustard and of course a large mug of beer to wash it down.

Shopping Tip: If you can´t find “Weisswürste” at your local supermarket or butcher, you can easily order them online.