Braised red cabbage is a popular German side dish.

Cabbage is one of the oldest leaf vegetables that humans used. Even the Ancient Greeks and Romans grew 14 different types of cabbage.

They all stemmed from the wild cabbage – the red cabbage as well. The close relative of the white cabbage was first mentioned in writing by Hildegard of Bingen in the 12th century.

Because it was a cheap and easily stored vegetable compared to many others, it was a staple on the meal plan of the poor.

Red cabbage was even seen as a remedy for the black death, boils and asthma in the Medieval Ages.

How is Red Cabbage called in German?

Red Cabbage is called either "Rotkraut", "Blaukraut" or "Rotkohl".

How to pronounce "Rotkohl"?

Listen to this audio file to hear how to say "Rotkohl" in German.

Like all types of cabbage, the red cabbage also stems from the wild cabbage, that is at home on the coast of South England, Ireland and France. Today wild cabbage is still grown in Heligoland (Germany).

For a long time, it was a key element of poor peoples diets, because it was a cheap and easily stored vegetable compared to many others, that provided Vitamin C in the winter time.

How to make German Red Cabbage without Bacon Video Tutorial 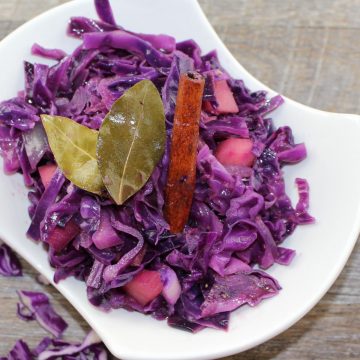 Serving Tip: This dish tastes the best if you reheat it. It is perfect to cook it the day before you plan to serve it. This recipe is well suited for canning as well.

Red cabbage can be stored for at least 14 days in the fridge. Once cut into, it should be covered with cling film and placed in the fridge as well.

That way it stays fresh longer – though the vitamin C content is lost relatively quickly.