This German compote style dessert made from red fruits is satisfying and refreshing not only on hot summer days.

Rote Grütze recipes call for some kind of a thickening agent. In the old days people used to use a mixture of rough-cut grain corns (oats, barley, buckwheat, corn, rye or wheat) or simply groats. Today people use cornflour, sago or vanilla pudding powder as a binding agent.

Of course, something sweet can’t be missing from this tangy dessert. In earlier times, people would pour cold cows’ milk, that they had on their farm anyway, over the Grütze. Today sweet cream, vanilla ice cream or vanilla sauce are the favorites. It is also the perfect topping to refine a semolina or rice pudding.

How is this Dessert called in German?

How to pronounce "Rote Grütze"?

Listen to this audio file to hear how to say "Rote Grütze" in German.

Where does "Rote Grütze" come from?

Rote Grütze is a typical speciality in northern Germany. From East Friesland to Bremen and Hamburg and up to Mecklenburg-Vorpommern – the dessert is tradition everywhere.

In a Schleswig-Holstein dictionary from the 17th century the first recipe for Rote Grütze can be found – “Roode Grütt”. At this time the cereal porridge was cooked in black currant juice and served with cream or milk.

Two centuries later, many different recipes were created, that contribute to the multitude of recipes that exist today. However, the origin is not quite clear, because the Scandinavians also claim the Rote Grütze for themselves. 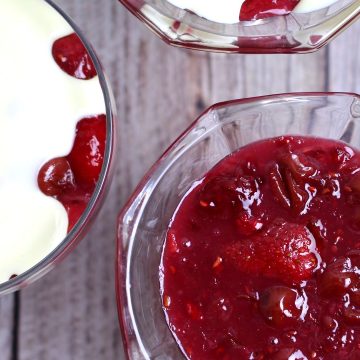 Serve with vanilla ice cream, vanilla sauce or heavy whipping cream and garnish with fresh berries. Tip: You can make "Rote Grütze" with frozen fruit as well as with fresh fruit.

How to serve "Rote Grütze"?

Nowadays there are many different variations of Grütze. Depending on your taste, you can create your own “Rote Grütze” – there are no boundaries, not even when it comes to the color!

The traditional variation of “Rote Grütze” include black and red currants as well as raspberries and strawberries. Sometimes Morello cherries are included as well. Strawberries make it sweeter, which kids love. Sweet and sour cherries as well as rhubarb are also great.

Sometimes even fruits such as pineapples or bananas will make their way into the mix. Gooseberries are an important ingredient in a “Grüne Grütze” (green Grütze), peaches will change to colour of the Grütze to yellow.