Sauerbraten is a meat dish in which the meat is marinated for several days before cooking. Sauerbraten is a real classic in Germany and is prepared in many regions in this country in slightly different variations.

Germany Has Many Different Traditional Sauerbraten Recipes Depending On The Region

The recipe in this post features one of the most traditional and iconic sauerbraten recipes of Germany: Rhenish Sauerbraten. Stunningly rich flavors of the meat and the luxurious gravy make this dish extremely satisfying!

How Is This Version of Sauerbraten Called in German?

The dish is called "Rheinischer Sauerbraten".

What Does Sauerbraten Mean?

"Sauer" is the German word for sour or tart and "Braten" is the word for roast. Literally translated sauerbraten means sour roast.

How to Pronounce "Sauerbraten"?

Listen to this audio file to hear how to say "Sauerbraten" in German.

Ginger snaps, even very popular in recipes all over the internet are not an ingredient of authentic German Recipes.

Printen are a special kind of spiced German gingerbread from Aachen also called Aachener Printen. They are usually eaten at Christmas and come in many variations. Usually the uncoated brown Printen are used for the sauerbraten. Kräuterprinten are herb infused Printen.

Sauce cakes or sauce gingerbread are only slightly sweetened, simple gingerbread, which are used to refine and bind dark sauces, i.e. of sauerbraten and game dishes. They can also be used for red cabbage and other hearty dishes.

Honigkuchen is German aromatic honey cake. It is easy to bake and can be enjoyed all year round but is usually enjoyed during the time leading up to Christmas in Germany.

Sugar beet syrup or honey is used to balance the acidity of the wine and vinegar.

Use red wine vinegar or raspberry vinegar for the recipe. Alternatively you can use red balsamic vinegar too.

Best is to use a red wine that you like to drink too. I usually recommend a dry wine.

Best Cut of Beef to Use for Sauerbraten

Best is to use a finely marbeled chuck roast, beef shoulder or beef bottom round.

What Long to Marinate Sauerbraten?

You can find recipes with a marinating time of only 2 to 3 days. But for my personal preference this is too short and I usually marinate my sauerbraten at least for 5 days, but prefer 7 to 10 days. Some people marinate the sauerbraten even for 2 to 3 weeks. The longer the roast marinates, the more intense will be the color and taste and the shorter will be the cooking time.

Can Sauerbraten be Frozen?

Sauerbraten can be frozen easily. You can freeze the whole roast or the already slices roast in the gravy. 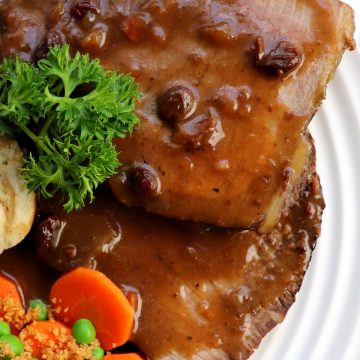 The cooking time depends on the cut of the meat and the timeframe for how long you marinated the meat. Just cook it until it is fork tender.

Yield: 1PortionCalories: 481kcalCarbohydrates: 16gProtein: 36gFat: 26gFiber: 1gSugar: 8g
Tried this recipe?Let us know how it was!

How Many Calories Does Sauerbraten Have?

A portion of sauerbraten with gravy has around calories. See the table above for more information.

What to Serve With Sauerbraten?

Traditionally Rhenish sauerbraten is served with potato dumplings and a side of apple sauce.

But spaetzle or bread dumplings are also a classic side dish. If you like a faster variation serve with noodles, rice or boiled potatoes which are not the classic sides but still very tasty.

Additionally serve with a vegetable side dish. Red cabbage or carrots & peas with buttery bread crumbs are a perfect companion and an all-time favorites.