This German pot roast is one of the most famous German dishes. Some people might even say, that Sauerbraten is Germany´s national dish.

In this post I will show you that it is really easy to make an authentic German Sauerbraten with this foolproof, easy recipe. The crucial ingredients for a perfect Sauerbraten are patience and some planning ahead, as the most important step is marinating the meat for 5 to 10 days before you want to cook it.

Many regions have similar recipes and the traditional recipe in this video represents the recipe that is the classic recipe in Germany and probably the style of Sauerbraten that you might got served in a German Gasthaus.

The Rhenish Sauerbraten is the other authentic German Sauerbraten recipe and people from this region insist on that this is the only and true German Sauerbraten. In my opinion it all comes down to your personal preferences. Try both recipes and find your favorite.

The classic Sauerbraten has been on German menus for many generations and has undergone quite a few changes since then. Like so many traditional dishes, it originated from the need to preserve it. The original recipe was prepared with horse meat, which gave the sour roast its trademark at the time. Horse meat is known to have a much firmer structure than beef. Therefore, a sour pickle was used to make the meat tender and, above all, to preserve it for a longer time.

Nowadays, luckily horse meat is rarely found on the shopping list for the classic Sauerbraten, and has been replaced by beef in recent decades. What has remained, however, is the delicious marinade that gives the roast its distinctive name and astringent flavor.

What Cut Of Meat To Buy For This Roast?

Nowadays usually beef is used for Sauerbraten. In the past, horse meat was also common for the Rhenish version of the roast. More rarely, pork, lamb, rabbit or game is also used for regional styles of the German roast speciality.

The selection of the cut and the quality of the meat are crucial. Generally the upper rump and parts of the leg are suitable for this dish.

The best meat is considered to be the shovel cut from the beef shoulder. It is located in the upper middle of the shoulder and is the perfect roast piece and is particularly suitable for slow braising. The meat is finely marbled and has a well-developed connective tissue. Long braising causes the fat and connective tissue to break down into juicy gelatin, which gives the Sauerbraten meat its buttery soft texture.

Tip: The meat loses weight during the marinating and cooking process. You should therefore rather assume 1.5 times the desired serving quantity when purchasing your meat.

How to pronounce "Sauerbraten"?

Listen to this audio file to hear how to say "Sauerbraten" in German.

What Does Sauerbraten Mean In English?

Literally translated, Sauerbraten means sour roast. The meat is marinated for several days in a vinegar marinade which adds a pleasant, slightly tard note to the meat without tasting acidic.

How To Marinate? Step-by-Step Video Tutorial

Usually you want to marinate your meat for 5 to 10 days before you want to cook it. However, you can also marinate the meat for 2 to 3 weeks. The longer the roast is marinated, the more intense the color and flavor will be and the shorter the cooking time.

How To Cook And Make The Gravy? Step-by-Step Video Tutorial

Tender braised beef in a sour dark gravy based on red wine and vinegar makes the perfect Sauerbraten.

Also add a vegetable side dish or a salad to your meal. A side of red cabbage, peas & carrots, or a German salad platter are great choices.

What To Do With Leftovers?

The roast and the gravy both freeze very well. I like to make a double batch of Sauerbraten and freeze half of it to make the most of the kind of lengthy marinating time. 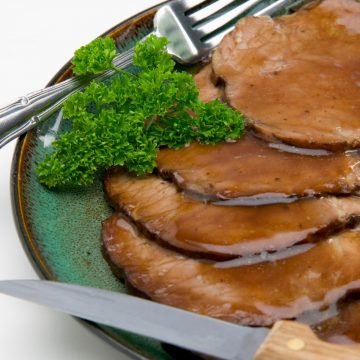 How does Sauerbraten taste?

The German braised roast has a slight sour note that stems from the vinegar marinade. The aroma is rather delicate than strong acidic.

I personally prefer to make the roast in a dutch oven, but you will also have great results using a crock pot. If you don't have a slow cooker or dutch oven you can also just use a large pot with a lid.