German lard spread with apples and onions is a popular pre-starter while you are checking out the menu and waiting for your food to be served. This little pre-starter is called "greetings from the Kitchen" or in German "Gruß aus der Küche".

“Schmalz” is the German term for rendered animal fat and refers to the Germanic word “smalta” “schmelzen” (to smelt).

Lard is usually produced from various parts of the pig, but there are also higher quality variants, such as goose lard available.

How is Lard called in German?

Lard is called "Schmalz" or "Griebenschmalz" if it contains small cracklings.

Listen to this audio file to hear how to say "Griebenschmalz" in German.

This German specialty sounds not very appetizing but you still should give it a try. Spread on homemade bread and sprinkled with a tiny bit of salt this spread will convince you that lard is way tastier than it sounds.

Money Saving Tip: If you are cooking a pork shoulder that has a rind and a thick layer of fat don´t waste the fat layer and through it into the trash. You can use it to make „Apfel-Griebenschmalz“. 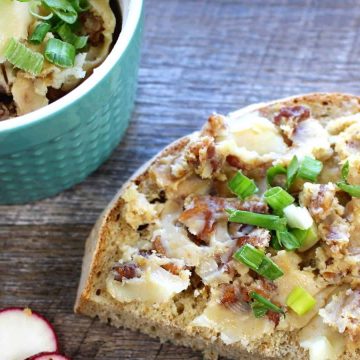 Store refrigerated. It will keep for several weeks!

Serve with homemade German bread as a starter or with an assortement of German cold cuts and cheeses as a rustic “Brotzeit” dinner.

This spread does not only taste good with a mug of cold beer. A nice glass of Riesling or German apple cider is a great companion too.

Cooking Tip: If you don´t add apple and onion pieces and remove the cracklings you will end up with plain “Schmalz” that you can use for frying and all kinds of German dishes.