No one really can prove who first thought of the idea of frying small potato slices in fat.

Among others, this is one of the legends about the apparent inventor of the Bratkartoffeln (fried potatoes).

Apparently, in 1907 a Viennese housewife named Henriette Josefa Braths submitted a recipe for roasted potatoes to a cooking competition in a newspaper. According to the tale, the editor was so impressed with the recipe, that he promptly named it after the author: “Brathskartoffel” (Braths potatoes).

Shared living of a special type: the “Bratkartoffelverhältnis”

In the years following the war, shared living spaces were often referred to as “Bratkartoffelverhältnisse” (fried potato conditions). At the time, there were dozens of soldiers returning home, who found sanction in the homes of widowed women. Officially these living conditions were declared as renting conditions, so that the widows would not lose their entitlement to their widow’s pension. The “Bratkartoffelverhältnis” became a synonym for this relationship.

How are Fried Potatoes called in German?

Listen to this audio file to hear how to say "Bratkartoffeln" in German.

How to achieve the perfect fried potatoes?

The right type of potato is crucial for fried potatoes: they should be waxy/all-purpose potatoes. If you prefer them to be crispy on the outside and softer on the inside, these potatoes are the right choice. Whether you use precooked or raw potatoes, both work. If you pre-cook them, make sure to leave them to cool, as this will make them easier to cut and help them keep their shape – cooked potatoes from the day before work perfectly for this.

The choice of pan is also very important. If you are trying to go low fat, a coated pan is your best bet, if you prefer them nice and crispy, a cast-iron pan is the way to go. Whichever pan you chose, it is important to remember: The pan should be at a high temperature to ensure for a crispy end result, but don’t overfill your pan, less is more, to make sure they can all fry evenly. The cut potatoes will need to fry around 3 to 4 minutes per side. To avoid your fat burning in the pan, avoid butter and opt for a clarified butter or natural plant oil, for example rapeseed instead. There should be enough fat, but not so much that the potato slices are swimming in it.

To Pre-Cook or Not to Pre-Cook?

Opinions often differ on this point. The fact is that both work perfectly. If the potatoes are raw, however, more skill is needed to achieve the right crispiness and cooking time at the same time. In the video tutorial you can see how I like to fry potatoes so they get crispy on the outside and soft on the inside. This works best in a cast iron skillet. I use a non-stick pan in my video to demonstrate that you can get crispy skillet-fried potatoes even in a non-stick pan.

It is easier to make fried potatoes with pre-cooked left-over potatoes method but the frying process is basically the same. If you don't have left-over potatoes but have the time plan, then you should ideally cook your jacket potatoes a day ahead. It's important that the potatoes are completely cooled through before you slice them. Whether slices or cubes, that is of course another personal preference. If you choose slices, make sure that they are not cut too thin, otherwise they will break during the frying process.

Which Potatoes Are Best for Fried Potatoes?

Starchy potato varieties are not suitable for fried potatoes, because they quickly fall apart. For a perfect result, firm-cooking varieties are optimal, for example Bintje, Charlotte, Maris Peer Jersey Royals, Asterix, and Viktoria. If you like crispy fried potatoes with a fluffy center, then you should go for all-purpose potatoes, such as Yukon Gold or White Potatoes. This is the best way to get this amazing bite experience of crispy and fluffy.

Many people prefer deep fried potatoes because of their crispiness. But you can achieve the same crispiness using the pan fried method for a healthier version of the delicious side dish.

The trick is the right fat and the right amount of fat.

Butter should not be used for this purpose. It contains too much water and milk proteins, which burn quickly at high heat. The butter will turn dark, and will make the potatoes taste bitter. If you don't want to go without the delicious taste of butter, simply use clarified butter aka Butterschmalz in German. A neutral vegetable oil, for example sunflower oil, canola oil, peanut oil, or rapeseed oil, is also well suited. The right amount depends on the type of pan. With coated pans, you will definitely need less oil than with a cast-iron pan. The slices should not float in oil, but have enough fat to coat the frying side of the potato completely.

Is This Recipe the Same Like Southern Fried Potatoes?

Southern fried potatoes and this German fried potatoes recipe are pretty much the same. German immigrants brought the delicious side dish all over the world and you will find similar recipes in countries all over the world. The addition of smoked paprika is very popular in the US. The main ingredients are usually potatoes and onions, but often upgraded with slices of sausage, bacon, ham, or cheese. 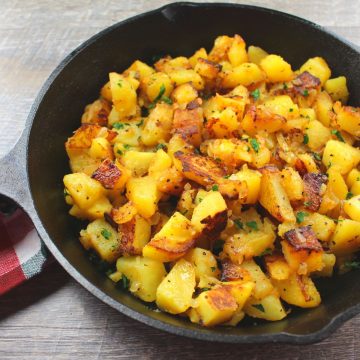 To make this dish even better add some bacon cubes to the pan and fry them translucent before you add the potatoes.

For a gourmet version add small cubes of authentic Black Forest ham at the last five minutes of frying to the potatoes.