German Hunter Sauce. This sauce is perfect for Jagerschnitzel and Spaetzle and very easy to make from scratch.

Depending on the region in Germany you will order “Jägerschnitzel” in a restaurant you will get a dark, rich mushroom gravy or a creamy mushroom gravy with or without bacon.

How is Mushroom Gravy called in German?

Listen to this audio file to hear how to say "Jägerrahmsoßte" in German.

Besides serving this gravy with schnitzels you can serve it over bread dumplings as another traditional dish called “Rahmschwammerl”. This makes also a wonderful vegetarian main dish if you leave out the bacon. 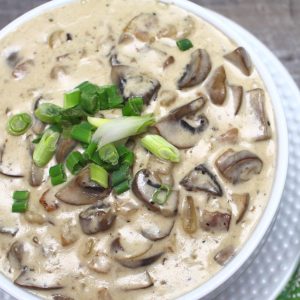