In the old days, German plum dumplings were a delicious dessert for the colder days of the year. But since plums are now almost always available, this recipe can be made at any time of year.

Plum dumplings are real soul food, sweet, comforting and filling. They make a very special dessert after a light meal and can be served with vanilla ice cream or vanilla sauce.

The juicy plums are packed into a sweet pillowy yeast dough in this recipe, whereas other traditional plum dumpling recipes call for potato or quark dough. If you are looking for the later check out my Marillenknödel aka Sweet Apricot Dumplings recipe, which is made with quark dough.

If you are enjoying German desserts you should check out the list of my 31 best German Desserts. I'm sure you'll find some new favorites in there.

How are plum dumplings called in German?

How to pronounce "Pflaumenknödel" the correct way in German?

Listen to this audio file to hear how to say "Pflaumenknödel" the right way.

How to pronounce "Zwetschgenknödel" the correct way in German?

Listen to this audio file to hear how to say "Zwetschgenknödel" the right way.

The most important ingredient in this recipe is undoubtedly great plums; aside from that, only a few staple ingredients are required.

Plums: In Europe, usually Italian plums are used for this recipe. If you can't find Italian plums, you can choose purple or red plums. Make sure that they are ripe but not too soft.

Sugar Cubes: The stones in the plums are replaced by sugar cubes. During the cooking process, the sugar dissolves and infuses a wonderful sweet flavor into the plum. I use white sugar cubes, but brown sugar cubes can also be used.

Flour: For plum dumplings, I prefer all-purpose flour. This recipe can also be made with whole grain or spelt flour. However, you may need to adjust the amount of milk.

Sugar: For the yeast dough and buttered bread crumbs, I use granulated white sugar, but you can substitute with brown sugar.

Yeast: You can use any yeast that you have on hand. If you use instant yeast and are confident that it is still ready to use, you can skip the blooming step.

Milk: I love baking with high-quality whole milk. Feel free to use any milk you have on hand.

Butter: I only use butter when baking, but you can substitute margarine for the butter.

Bread Crumbs: Make sure to use plain bread crumbs or panko for this recipe. Flavored bread crumbs would ruin this dessert for you.

Cinnamon: Powdered cinnamon adds a distinct, comforting flavor to German plum dumplings, which everyone loves and fondly remembers from childhood.

Despite the name, German plum dumplings can be made with a variety of fillings.

Apricots: Sweet, ripe apricots are used in some of the most popular sweet dumplings. In Bavaria and Austria, Marillenknödel are typically made with quark dough. However, you can substitute apricots for the plums in this recipe.

Strawberries: Strawberries are also a delicious filling for the dumplings, making this dessert more of a spring and summer treat. Instead of buttered bread crumbs, sprinkle with powdered sugar for a lighter experience.

Chocolate: Wrap one or two pieces of your favorite chocolate into the sweet yeast dough. You can also add a dollop of Nutella. This works best if you use two teaspoons to set Nutella drops on an oiled plate. Freeze the drops for about 30 minutes before you wrap them in the dough.

Making German plum dumplings is a fun activity for the whole family or a date night.

Step 1: In a large stand mixer bowl, combine flour and salt. Make a well in the center and add the yeast and half of the sugar.

Step 2: Pour about half of the lukewarm milk into the well and whisk it together with the yeast-sugar mixture while incorporating some of the flour.

Step 3: Allow to rest for about 10 minutes, covered.

Step 4: Mix in the soft butter, egg, salt, and the remaining sugar and milk.
Knead the dough for about 10-15 minutes, or until it is smooth and elastic.
Allow it to rise, covered, for about 30 minutes.

Step 5: In the meantime, wash the plums and cut them into halves.

Step 6: Remove the plum stone and replace it with a sugar cube.

Step 7: Bring about 4 quarts of water to a light simmer in a large pot. Cut the dough into 8 pieces. Shape each piece into a ball, then flatten it.

Place a plum in the center of the dough, flat side down. Then fold the dough over the plum and pinch it closed. Roll the dough ball lightly and make sure the seams are completely closed.

Step 8: Cook the dumplings for 30 minutes, uncovered. Check that the water is not boiling.

Step 9: In the meantime, melt the butter in a large frying pan. Fry the breadcrumbs in the butter over medium heat until golden brown. Cook for another two minutes after adding the sugar.

Step 10: Roll the dumpling in the buttered crumbs until completely coated, and then repeat with the remaining dumplings.

Leftovers can be kept in the refrigerator for a few days. They can be reheated in a pan with a little butter or in the microwave.

I don't recommend freezing leftover plum dumplings because they get soggy.

If you want to make German plum dumplings for a larger group, prepare them and freeze them immediately after rolling the dumplings. At the day you want to serve them, allow the dumplings to defrost at room temperature and then cook them according to the recipe.

Because the buttery crumb coating that covers the German plum dumplings is already very decadent, they are usually served just as is. However, serving them with vanilla ice cream or homemade German vanilla sauce elevates them even further. 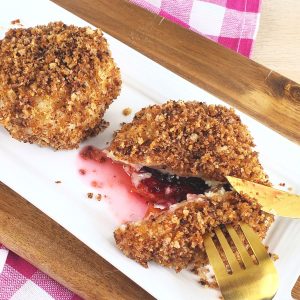 What can you do with leftover plums?