One of the most traditional German rolls are Kaiser rolls or Kaisersemmel called in German. The outside of these delicious buns is crispy and the inside is soft and fluffy. The dough for these amazing bread rolls is very easy to make and you only need a few ingredients.

The recipe for this crispy and fluffy rolls goes back to the 17th century. You can even find them on art paintings in castles from this time. According to legend, a Viennese baker named Kayser invented the Kayser roll around 1750.

Who the inventor of the Kaisersemmel is cannot be definitively determined.
One legend says that a Viennese baker named Kayser invented the Kayser roll around 1750. He is credited with recognizing that the flavor comes primarily from the crust and that the indentations in the roll increase the crust surface and therefore the flavor.

In the 18th century, the price and weight of the roll were regulated in a by law. According to a story, in 1789 the bakers' guild decided to send a deputation to Emperor Joseph II (1741 - 1790) to oppose this statute.

The prices of raw materials, such as flour, were expensive in relation to the fixed price of the roll, which meant that bakers could hardly make a profit. Therefore, the bakers wanted to set the price themselves.
The emperor was so taken with the bakers' craftsmanship that he approved the removal of the roll from the statute.

In these days the addition of the word "Kaiser" (emperor) in connection with food was regarded as the highest elevation of quality. Only the best was good enough for the beloved emperor. It could be believed that therefore the high quality of the bread roll gave the "Kaisersemmel" it´s famous name.

The elaborate method of production made the Kaiser roll a handmade luxury item until the middle of the 20th century.

German “Brötchen” are famous all around the world. The crispy outside and the flavorful soft inside makes it one of the most popular German food choices.

They are perfect for all kinds of savory and sweet breakfast toppings but also a great base for hundreds of sandwich variations.

What Does Kaiser Mean in German?

Kaiser is the German word for emperor.

How Is a Roll Called a German?

A roll is either called "Brötchen", "Schrippe", "Weckle", "Wecken" or "Semmel", depending on the region.

How To Pronounce "Brötchen"?

Listen to this audio file to hear how to say "Brötchen" in German.

Generally, Germans eat their primary meal of the day at midday but the evening meal is served cold and is made up of meats, cheeses, and bread.

The evening bread otherwise known as Abendbrot is served and eaten together as a family though everyone is allowed to assemble their open-faced sandwich to taste.

Ingredients You Will Need

Traditionally these rolls are made with wheat flour. All purpose-flour is the best choice for the buns.

I use only 1 tsp. of sugar in this recipe, this is enough to activate the yeast.

In the original recipe lard is used for the dough. But you can use butter instead. I would not use oil instead.

You will find barley malt in many German bread recipes. Barley malt is dried, roasted and ground grain. It supports the yeast and the fermentation and improves the texture of the dough. It also gives bread a fine malty aroma and provides a nicely brown crust. You can find barley malt in online stores.

How To Make These Traditional Rolls - Video Tutorial 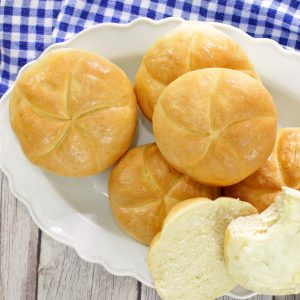 You can use an apple cutter instead of the Kaiser roll stamp which gives the roll the traditional Bavarian roll pattern. If you don´t have an apple cutter, cut a large cross in the surface of the roll.

You can decorate the rolls with sesame or poppy seeds. Spray lightly with water and sprinkle with seeds
before baking.

What Are Kaiser Rolls Used For?

Serve with sweet or savory toppings. They make a great companion for a soup or salad.

The typical star-shaped signature look of this wheat bun makes it to a Kaiser roll. The star-shaped look of the roll is achieved either by cutting, pressed with a kaiser roll stamp or folding the dough.

Is a Kaiser Roll Crusty?

The rolls have a crusty outside that is crispy but not too hard. The inside of these rolls is soft, but dense and chewy. It is very filling and you will not overeat on these rolls even they are heavenly delicious.