Semolina Pudding is a German dessert that can be made very simple with just 3 ingredients, semolina, sugar and milk.

But this recipes has a more indulgent touch and a little special something that brings the simple semolina pudding to another level. The velvet, creamy texture of this dessert gives it a festive touch.

How is semolina pudding called in German?

Semolina pudding is called either "Griessbrei" or "Griesspudding" in German speaking countries.

Listen to this audio file to hear how to say "Griessbrei" and "Griesspudding" in German.

Listen to this audio file to hear how to say Griessbrei and Griesspudding in German. 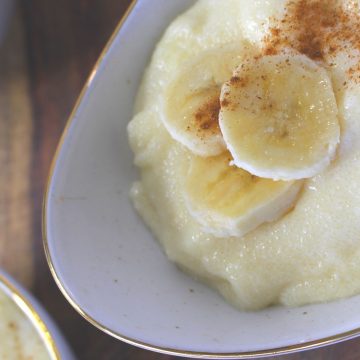 You can serve this dessert either warm or chilled.

How to Serve Semolina Pudding?

Semolina pudding is delicious warm but can also enjoyed chilled. You can eat the pudding as is, with a cinnamon-sugar mixture or my favorite topping is apple sauce or fruit compote.

More recipes you may enjoy