Nobody is really sure how the cucumber made it to Germany. Some say it came from India. Others think it stems from South Africa. From there it supposedly came from Morocco to the area by the southern Mediterranean Sea.

One thing is certain: the roman emperor Tiberius grew cucumbers in his courtyard gardens. From there, the plant found its way to northern Europe. The center for its cultivation was Hungary for a long time.

The cucumber belongs to the pumpkin plants and is actually a berry. Because of its hearty taste however, it counts as a vegetable.

Most of the vitamins are contained in the skin. This can be eaten with the rest after being washed thoroughly.

Did you know, that we always eat unripe cucumbers? In their ripened state, they would actually be yellow!

How are Cucumber Salad called in German?

How to pronounce "Gurkensalat"?

Listen to this audio file to hear how to say "Gurkensalat" in German. 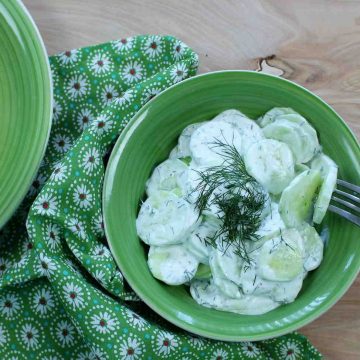 What to serve with Cucumber Salad?

Creamy dill cucumber salad makes a great side dish to “Käsespätzle” (cheese pasta) and all kinds of meat and fish dishes.

It is also a great addition to the traditional German “Abendbrot” (German dinner meal) or a German salad platter.