Learn how to make this German favorite snack named “Fleischsalat”. It only takes 10 minutes to throw together. “Fleischsalat” is a kind of sandwich spread that consists of bologna, mayonnaise, onions and pickles. You can find it in any German supermarket and every German butcher.

Listen to this audio file to hear how to say "Fleischsalat" in German.

How to make German Meat Salad aka Fleischsalat Video Tutorial 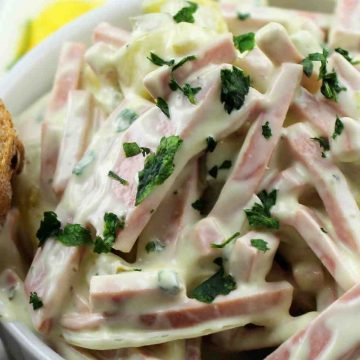