If you haven't had a German waffle, you're missing out. They're fluffy, airy, and delicious. You can serve them with a variety of fruit compotes, whipped cream, or chocolate sauce - or keep it simple with powdered sugar. No matter how you eat them, German waffles are a treat worth trying.

Waffles are the unsung heroes of every German home! Nothing beats waking up on a Saturday morning and stumbling out of bed to a decadent plate of freshly made waffles slathered with homemade apple compote, cinnamon, and a generous dollop of whipped cream. They are, however, more than just a weekend breakfast treat. Scroll down to see what meals Germans enjoy eating these pillowy treats with.

If you love desserts, you need to check out my ultimate list for the Best German Desserts. I am pretty sure you will find some new favorites.

Waffles are less common for breakfast in Germany. They are more commonly consumed as a dessert, snack, or as a substitute for cake at the famous German coffee hour.

In some areas of southern Germany, waffles are the go-to lunch on Saturdays. The quick and easy lunch is not only budget friendly but also a lot of fun for the whole family.

Waffles are also a must-have item at any German fairground, Oktoberfest, or Christmas markets. The popular treat is served in a variety of delicious tasty ways.

How are waffles called in German?

The German word for waffle is "Waffel". Die Waffel (f) in singular and die Waffeln (f) in plural.

How to pronounce "Waffel" the correct way in German?

Listen to this audio file to hear how to say "Waffel" the right way.

German waffles have simple ingredients that are similar to other international waffle recipes.

Making German waffles is simple and straightforward, but one simple extra step is the key to the amazing texture.

Add the vanilla sugar and sugar to the egg yolks and whisk on high speed until the mixture is fluffy and light.

Melt the butter and add it with the milk to the egg yolk mixture. Make sure that the melted butter is not too hot.

Mix the baking powder and the flour in a separate bowl. Add the flour to the batter spoon by spoon while mixing on low speed.

While the waffle iron is heating, fold the egg whites into the waffle batter.

Brush both sides of the waffle iron with butter. Add one ladle of waffle batter to the waffle iron and bake until golden and crispy. Repeat these steps until all the batter is gone.

Hint: Keep the already baked waffles warm on a plate by placing them in a preheated oven set to 120 degrees Fahrenheit.

Give the dish a special touch.

These kitchen tools are required to make this recipe.

Raw waffle batter can be stored in the refrigerator for 1-2 days. Baked waffles should be stored in a tin wrapped in a piece of aluminum foil. To reheat the waffles, use a toaster instead of the microwave, as the microwave will make them soggy.

A German waffle bar complements any breakfast or brunch. It also makes an excellent dessert bar for any wedding or baby shower. They will be also popular for all age groups at your Oktoberfest celebration party when arranged with various toppings.

German waffles are served with a large variety of topping. Fruit compotes, apple sauce, jam, whipped cream, hazelnut spread, chocolate or vanilla sauce, or just powdered sugar are the most popular variations. One of my favorite toppings is this tipsy Black forest cherry compote.

German waffles are also wonderful served with vanilla ice cream and a generous dollop of whipped cream. Make this dessert even more decadent by adding your favorite caramel, strawberry or chocolate sauce. 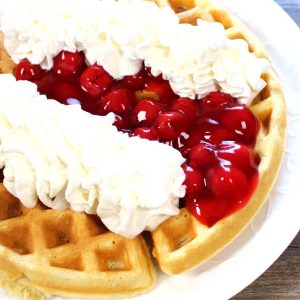 Are Belgian waffles from Germany?

According to the Brothers Grimm's German dictionary the waffle is an ancient Lower Franconian festive and fasting pastry like Krapfen and Strauben. The recipe for waffles was brought from France by the Franconians and gradually spread throughout Germany.