This authentic German recipe features soft, fluffy Berliner (German style doughnuts) which are filled with delicious jam and Nutella and are dusted with a generous amount of powdered sugar.

Berliner donuts are popular pastry that you can find in every bakery all year around in Germany. The are enjoyed by people of all ages for breakfast, dessert and the famous German coffee hour. They are usually made from yeast dough and come filled with various types of jams, spreads and creams, and are coated with powdered sugar or other glazes.

These homemade German doughnuts are way easier to make as you might think. With this basic recipe you can make a lot of different variations of Berliner that you can enjoy with very little active work involved.

Yeast balls baked in lard are documented in northern Germany as early as the 16th. According to popular legend, Berliner doughnuts were invented in 1756 by a Berlin confectioner who wanted to serve as a gunner under Frederick the Great and proved unfit for military service, but was allowed to stay with the regiment as a field baker. As a "thank you", so to speak, he created the first "Berliner". He shaped the yeast dough pieces round like the shape of cannonballs. Since no oven was available, he fried them in a large pot full of oil on an open campfire.

Did John F Kennedy claim to be a donut when he said "Ich bin ein Berliner"?

“I am a Berliner” is a speech by United States President John F. Kennedy given on June 26, 1963, in West Berlin. It is widely regarded as the best-known speech of the Cold War and the most famous anti-communist speech.

There is a widespread misconception (outside German-speaking countries) that the phrase was not used correctly and actually means “I am a doughnut”, referring to the Berliner doughnut. It has even been embellished into an urban legend, including equally incorrect claims about the audience laughing at this phrase. A Person born or living in Berlin is actually called a Berliner in everyday language German, so no German would have thought that President Kennedy referred accidentally to himself as a donut.

You will understand how confusing this might be if you know that "Berliner" are actually called "Berliner Pfannkuchen" (Berlin pancakes) in Berlin and East Germany. But the German donuts are called "Berliner", "Kreppel" or "Krapfen" everywhere else in Germany.

What Does Berliner Mean In English? Does It Mean Donut?

The word Berliner hast two meanings: 1. Berliner refers to someone or something from or in Berlin. I.E. Berliner Theater (Berlin Theater) or "He is a Berliner", like you would say "He is a New Yorker". The 2. meaning refers to the Berliner Pfannkuchen (German jam filled donut), short called Berliner.

How Are German Donuts Called?

Depending on the region they are called "Berliner", Pfannkuchen", "Kreppel" or "Krapfen".

How To Make Step-by-Step

Heat the milk to lukewarm and add the flour to a stand mixer bowl.
Then form a well and add the sugar, yeast, and the lukewarm milk to the well.
Gently mix the milk with the sugar and yeast while you are incorporating some flour from the rim of the well. Then cover the bowl with a clean kitchen towel and allow to sit for about 10 minutes.

Add the zest of about half of a lemon, the milk, the whole egg and the egg yolks, butter, and salt to the bowl.

Knead on medium for about 10 minutes or until the dough is smooth and elastic. During the first few minutes of kneading, you would add the rum, vinegar, and vanilla extract to the dough. If you prefer not to add alcohol to the dough, add milk instead.

The vinegar is the secret ingredient that gives the Berliner it´s fluffiness, don´t worry you will not taste it.

Check if your dough is ready to proof with the so called windowpane test. Then cover the bowl again with a clean kitchen towel and let the dough proof for about 1 ½ - 2 hours.

After the proofing time, slightly dust the countertop with flour and divide the dough into 12-14 equal sized pieces. You can weigh this, but as you know I only eyeball it.

Shape each piece to a ball and place it onto a with parchment lined baking sheet. Flatten each ball with the palm or the fingers of your hand. Alternatively you can use a large drinking glass to flatten the balls.

In the meantime, add oil to a large pot and heat the oil to about 330°F. If you don´t have a thermometer on hand you can use a wooden spoon or skewer to test the temperature of the oil. The oil is ready if you see little bubbles around the spoon.

While you are waiting for the oil to heat, line a cooling rack or baking sheet with two or three layers of paper towels. When your oil is up to temperature lower the dough balls carefully into the hot oil using a slotted spoon or strainer spoon. Allow enough space for them to float as they will rise during the frying process.

Fry the Berliner for about 1 ½ to 2 min. on one side before you turn them to the other side, where you fry them for another 1 ½ to 2 minutes

When they are golden brown and fully cooked, remove the Berliner from the oil and place them onto the with paper towel prepared cooling rack.

Allow them to cool slightly before you roll them in sugar. This step is optional but if you like it sweet, you might want to do this.

Then allow them to cool completely before you fill them with jam or Nutella using a filler tube nozzle tip.

Tip: Warming the jam before filling it into the piping bag will make it easier to pipe. It is best to use smooth preserves. Jam that contains fruit chunks will make it impossible to fill the donuts as the chunks will clock the piping tip. If you have jam with larger pieces of fruit just pass the jam through a fine mesh sieve.

Berliner are traditionally filled with smooth, high-quality preserves. But you can find them also filled with hazelnut spread like Nutella or Eierlikör cream and other delicious fillings too.

You can coat the tasty pastry with icing instead of powdered sugar. To do so, mix 1 cup of powdered sugar with 2-3 tablespoons of hot water, lemon or orange juice. Whisk the icing until smooth and pour over the doughnuts - done! Or add some sprinkles or other decorations while the icing is still wet. As a special taste highlight, the icing can be refined with delicious fruit powder that intensifies the flavor of the filling. 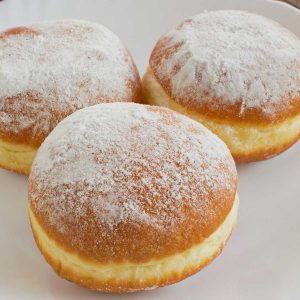 Preferably use smooth preserve without fruit chunks as it will be difficult to pipe the jam into the donuts. If you have jam with chunks just pass the jam through a fine mesh sieve.

What the difference between a Berliner and jam filled donut?

They look a lot the same and have the same concept but Berliner contain usually less sugar than the jam filled American donuts and are fluffier. German recipes call for high-quality ingredients and usually don´t use corn syrup, palm oil products or other unhealthy ingredients.