Delicious Northern German soup with a variety of fish fillets, shrimp and vegetables.

Büsum is a town on the North Sea, in northern Germany. It’s known for its fishing industry. The first documented mention of Büsum (as an island) dates from the year 1140.

Since 1818, Büsum has been used as a spa town visited for the healing effects of the seawater and the mudflats of the Wadden Sea.

German cuisine is mainly known for it´s heavy meat dishes. But especially Northern Germany has lots of amazing fish and seafood dishes that you would probably not expect but you absolutely need to try.

How is Büsum Style Fish Soup called in German?

How to pronounce "Büsumer Fischsuppe"?

Listen to this audio file to hear how to say "Büsumer Fischsuppe". 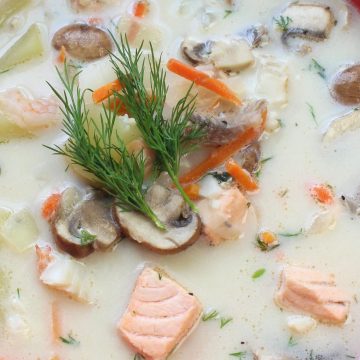 How to serve this German Fish Soup?