This simple rice pudding may not seem like much, but after you try it, you'll understand why Germans are so addicted to this dish that can be eaten for breakfast, as a snack, or even as dessert.

It can be served warm or chilled straight from the fridge, making it simple to prepare the day before.

As an alternative to making their own onion gravy, many German home cooks substitute Maggi's or Knorr´s prepackaged variety. However, with this recipe, you can make Zwiebelschnitzel from scratch in a healthier and tastier version that is still quick and easy to make.

How is Rice Pudding called in German?

Rice pudding is called "Milchreis" in German. “Milch” is the German word for “Milk” and “Reis” means “rice” in English.

Listen to this audio file to hear how to say "Milchreis".

The ingredients for this simple recipe are basic.

Which rice is best for rice pudding?

Round-grain rice varieties are ideal for making rice pudding. The grain should be large and round in order to absorb as much milk as possible. You should not wash the rice pudding before cooking because of the starch content, which causes the rice grains to stick together.

Arborio rice is one of the most well-known rice types of rice pudding. Its grain is the largest and most round, making it ideal for classic rice pudding. It absorbs milk without becoming mushy, does not clump, and retains a good bite due to its size. It can also be used for risotto dishes due to its high quality.

Check out my simple step-by-step instructions to learn how to make German rice pudding.

Melt the butter in a large pot over medium heat.

Add the rice into the pot. And cook for a few minutes over medium-low heat in the melted butter.

Pour in the milk, sugar, and vanilla extract. Bring the mixture to a boil over medium heat, stirring constantly.

Reduce the heat to very low and cover the pot with a lid.

Stir occasionally until almost all of the liquid has been absorbed. This should take about 20-30 minutes.

Meanwhile, combine the cinnamon and sugar and prepare the brown butter.

Serve warm with brown butter and a cinnamon-sugar mixture, or cold with fresh berries, compote, or apple sauce.

In general, there are no rules when it comes to rice pudding. Simply combine the dessert in the manner that you prefer.

This dish requires few dishes and ingredients, and it can even be prepared over a campfire.

Milchreis is not only delicious warm, but also cold. You can keep it in an airtight container in your refrigerator for up to a week. It is also an excellent choice for meal prep.

Even though rice pudding is a traditional winter comfort food, it is also delicious in the summer. It makes a great refreshing snack or dessert when served chilled straight from the fridge. 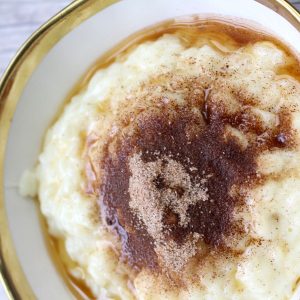