Have you ever heard of Germknödel? They're these sweet yeast dumplings from Germany and Austria that are like a vacation in your mouth. They're soft, fluffy, and smell amazing. Germknödel a staple at European ski resorts and are perfect for a cold winter day, but honestly, I love them any time of the year.

These delicious pillowy dumplings come filled or unfilled and are traditionally topped with a rich vanilla sauce and a sweet poppy-seed-sugar topping. I personally enjoy them most served with homemade fruit compote on top. Trust me, if you haven't tried them yet, you're missing out!

If you're a dessert lover, you need to check out my dessert section. I got some lecker German recipes for you to explore like this authentic Bavarian Cream, the boozy Herrencreme or the comforting Milchreis to name just a few.

What does Germknödel mean in German?

"Germ" is the Austrian and Bavarian word for yeast. Some people also call these dumplings "Hefeklösse". "Hefe" is the German word for yeast. "Knödel" and "Klösse" are both words for dumplings. So literally translated Germknödel means yeast dumpling.

Germknödel are a traditional dish that originated in the cuisine of Bohemia, which is a historical region in the Czech Republic.. They were brought to Bavaria and Austria, where they became a popular dish and were further refined and adjusted to the local taste over time.

Germknödel became a beloved sweet dish for centuries in the alpine regions of German speaking countries, where they are served as a dessert, snack or even main dish. The dish is especially popular at the Oktoberfest events and in German and Austrian ski lodges.

How to pronounce "Germknödel" in German?

Sometimes, less is more, you know? Like with this sweet dumpling recipe, a few ingredients can go a long way.

Flour - I use simple organic, unbleached all-purpose flour for this dish.

Butter - For best taste I use butter, but you can also use margarine or a neutral vegetable oil. You might need to adjust the amount of milk.

Yeast - In Germany and Austria, most people bake with fresh yeast. I cannot find fresh yeast where I live and use dry yeast, which works just as well.

Vanilla Sauce - I love to make my own rich homemade vanilla sauce, but you can also use store bought vanilla sauce.

Poppy Seeds - The poppy seeds for this dish are usually ground with powdered sugar in a blender. You could also use a mortar and pestle.

Even Germknödel are traditionally filled with plum butter or served unfilled, there are some delicious variations that you could give a try:

Don´t be intimidated to steam the dumplings, if you don´t have a convenient steam function in your oven. Get out your steamer basket that came with your pot set and is now hidden in the deepest corner of your kitchen cabinets. You will see how easy it is to use and you will use it more often. I admit that I am speaking from experience.

Step 1: First, shape a well into the flour, then add the yeast and sugar. Pour in some of the milk and mix everything in the well while incorporating some of the flour from the rim of the well.

Cover with a clean kitchen towel and allow to sit for about 15 minutes.

Step 2: Melt the butter in the remaining milk and add it along with the other dough ingredients to the mixer bowl.

Knead for about 5 minutes on low speed and additional 5 minutes on medium-high speed or until the dough is smooth and elastic.

Step 3: Allow the dough to rise covered for an hour and then divide it into 8 equal sized pieces. Shape each piece to a ball.

Step 4: Flatten each ball and fill it with a generous tablespoon of plum butter or your desired filling. Place the dumplings on a lightly floured surface and allow them to rise covered for 45 minutes.

Step 5: Add about 1-inch of water to a large pot. Place a steaming basket into it and bring the water to a light boil.

Spray the steamer basket with cooking oil and then place the dumplings carefully in it. Cover the pot with a lid and steam the Germknödel for about 20 minutes.

Step 6: Remove the dumplings carefully from the steamer basket and place them on individual deep plates.

Pour a generous amount of vanilla sauce over the Germknödel and sprinkle them with a mix of powdered sugar and poppy seeds.

Tip: If you don´t have a steamer basket for your pot you can use a large colander. Just make sure that it is heat-proof!

You might have thought this is a complicated dish, but luckily, it does not produce a lot of dirty dishes.

They easily keep in the fridge for two days and are still very tasty when warmed up (even in the microwave).

Germknödel can be also frozen. Steam the dumplings fully and then freeze them. To reheat them, thaw the dumplings at room temperature and then steam them for about 10 minutes as described in the recipe (better) or reheat them in the microwave (quicker).

Traditionally Germknödel are served with vanilla sauce and a topping that consists of powdered sugar and ground poppy seeds. Some people like to serve them with melted butter or fruit compote.

Try some homemade plum compote with these delicious sweet yeast dumplings, it is a match made in heaven! 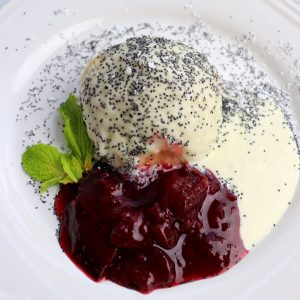