Who invented it? Hungarian Cowboys!

The word “goulash” which is commonly used today, originally came from the Hungarian word “gulyás”, which meant cow shepherd / cowboy. The dish itself was actually called “gulyáhus”, which means goulash meat. This refers to a simple meat dish that the Puszta-shepherds prepared and had more similarity to the goulash soup than the goulash stew that we know nowadays as goulash.

Today’s classic goulash recipe has been further developed both in Germany and Austria, for example by adding vegetable and potatoes like in this recipe.

How is Goulash Soup called in German?

Listen to this audio file to hear how to say "Gulaschsuppe" in German.

Goulash soup is a popular party dish in Germany. It is easy to prepare in large quantities and usually tastes better reheated instead of prepared fresh. If there is any soup left, you can easily freeze it.

Entertaining Tip: place small bowls with a variety of toppings next to the pot of soup that guests can garnish their own soup with, such as crispy bacon strips, sauerkraut, croutons, finely chopped chives, shredded cheese and sour cream. It’s always a hit at every party. 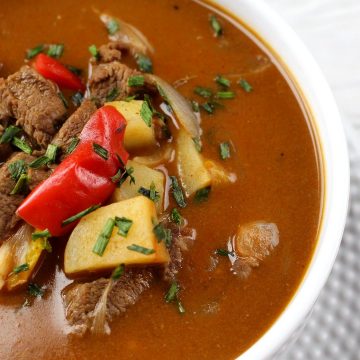 Serve with a crispy roll or a slice of homemade German bread.

Entertaining Tip: Serve the goulash soup in in bread bowls. You can bake them yourself, it is very easy. Use our crusty roll recipe for the dough.