Creamed herring, made with sour cream, apples, and onions, is a traditional matjes herring preparation. Some recipes also include ingredients such as yogurt, mayonnaise, or heavy cream.

Herring in creamy sauce is one of my favorite summertime meals, especially when paired with a crisp white wine or an Apfelschorle (apple juice with sparkling water).

If you enjoy herring or have leftover herring from this dish, try this quick and tasty herring sandwich aka Herringsbrötchen.

The delicious herring specialty is seasonal. In the months of May, June, and July, herring are typically refined into matjes after being caught.

The specialty is made by washing and then pickling herring. Pickling in brine allows the flavor to ripen optimally. Natural enzymes allow the herring meat to mature to the incomparable, tender matie.

The young herrings are throated immediately after the catch, usually while still on the fishing boats. Maties are said to have been invented around 1395 by Dutch fisherman Wilhelm Beukelzoon, who forgot to remove the fish's pancreas after cutting the throat.
He salted the herring as usual for preservation, and pancreatic enzymes added a unique flavor and improved fermentation.

For salting, matie herrings are traditionally stored in oak barrels. The technique of non-complete gutting described above is the key to its unique flavor.

This amazing fish dish is called "Hering in Sahnesauce" or “Matjeshering nach Hausfrauen Art”. “Hausfrau” is the German word for “Housewife” and "Matjeshering" means matie herring.

This matjes herring in cream sauce recipe is a straightforward and easy dish, that tastes especially good in the summer time, due to the tangy-fresh sauce, which makes it deliciously light.

Matjes herring can be difficult to find in your local supermarket. However, the herrings specialty is available at Costco and quite often in European grocery stores.

With just a few ingredients, you can make the creamed herring specialty from scratch.

Stir in the salt, pepper, sugar, and lemon juice.

Peel and core the apple, then cut it into thin slices. Peel and thinly slice the onion.
Cube pickles finely. Mix in the apple, onion, and pickles with the cream.

Rinse the herring filets, then pat them dry with a paper towel.

Then cut them into 2-inch-wide slices and add them to the bowl.

Chop the dill finely, add it with the herring to the bowl, and combine everything gently.

Marinate in the refrigerator for at least a few hours, preferably overnight.

The dish is not only delicious, but it also leaves behind very few dirty plates, which is always a plus.

Traditionally, you would serve this dish with fried or boiled potatoes or a crispy roll, but it also tastes great as a topping for jacket potatoes or potato pancakes.

Served on small slices of pumpernickel, this recipe makes a great appetizer and looks just like something served in a Michelin-starred restaurant.

The dish can be stored covered in the refrigerator for up to 3 days. I don't recommend freezing this dish.

Make this creamed herring dish the day before you plan to serve it to guests. This will alleviate stress during cooking and allow the herring to fully absorb the flavorings. 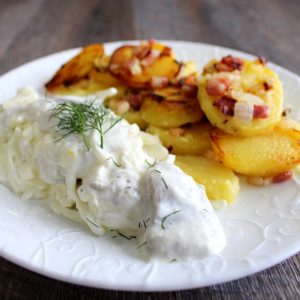 Serve with boiled or fried potatoes or a crispy roll.