Germknödel have their origin in the bohemian kitchen. They came from Bohemia to Bavaria and Austria, where they then were perfected.

Traditionally, they are filled with a kind of plum jam, but they are also popular with apricot and nougat fillings.

Germknödel are filled yeast-dumpling. It has been a beloved sweet dish for centuries, which can be served as a dessert, snack or even main dish.

It is especially popular at the Oktoberfest events and in German and Austrian ski lodges.

How are the Dumplings called in German?

Listen to this audio file to hear how to say "Germknödel" in German. 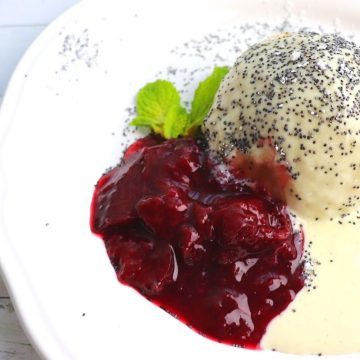 How to Serve Sweet Yeast Dumplings?

Try some homemade plum compote with Germknödel, it is delicious!