This Bavarian Beer Goulash is a traditional German dish that is a crowd-pleaser every time. The delicious German beer adds depth of flavor to the gravy, making it ideal for a Sunday night dinner with family and friends.

This classic German goulash recipe is made with beer and is known by the name Biergulasch (beer goulash) or Brauerei Gulasch (brewery goulash) or Bayerisches Gulasch (Bavarian goulash).

If you love goulash you should also try this traditional German beef goulash called Rindersaftgulasch.

Cow shepherds invented goulash, as it is nowadays known in Hungary. The word "goulash," which is commonly used today, originally came from the Hungarian word "gulyás," which meant cow shepherd. The dish itself was actually called "gulyáhus," which means goulash meat. This refers to a simple meat dish that the Puszta shepherds prepared. This was done in a cauldron over an open fire, and originally the dish didn’t even include paprika.

The shepherd’s original very easy cauldron goulash (the preparation probably occurred during the great migrations or came to Europe through the Huns, whose cultural circle has included many dishes that have been similar for generations, such as the Mongolian korma) is most similar to what we would know as a goulash soup today, and apart from the name, the original goulash hardly compares to today’s.

From the medieval ages to the late 19th century, Puşzta was an empire of giant herds of cows, that were driven to big markets all over Europe, for example to Moravia, Vienna, Nuremberg, or even Venice in large numbers. While traveling, the shepherds always made sure to have an "ill" animal with them, so they would be able to slaughter it and prepare a hearty meal with its meat.

How is goulash called in German?

How to pronounce Gulasch in German?

Click on the play button to learn how to say Gulasch in German.

Who wrote the recipes? The Czechs!

The first goulash recipe was not found in a Hungarian cook book, but, in fact, in a collection of recipes from Prague. This is due to the fact that recipe books didn’t exist in Hungary yet in 1819. The people of Prague decided to put the recipe out into the open and write it down – with huge success! Goulash was mentioned in a Viennese cook book in 1827.

And since it became popular in Vienna, goulash made its way to Germany. It was first found in a German cook book in the mid-19th century.

Modern goulash owes much of its improved flavor profile to the contributions of German and Austrian chefs. Many different variations of the original goulash were developed by adding spices, beer, wine, and other ingredients, as in this traditional Bavarian recipe.

The ingredients for this dish are simple but make an amazing meal.

Follow these easy steps to learn how to make this authentic Bavarian beer goulash from scratch.

Cut the beef into 1-inch large cubes and fry them until they are browned on all sides.

Stir in tomato paste, mustard, honey, and garlic paste and let simmer on medium heat for a couple of minutes while you are prepping the vegetables.

Peel the carrots and the onion. Remove outer layer from leek and wash well.

Finely cube the onion, shred the carrots and cut the leek finely.

Add vegetables and beer to the meat and mix well.

Simmer the goulash for about 2 hours with a closed lid.

Hint: Add additional beer if the meat appears to get too dry.

Change the flavor profile with these ideas:

To make this delicious beef goulash you don´t need to dirty a lot of dishes.

Spaetzle, Salzkartoffeln (German boiled potatoes), bread dumplings and potato dumplings are wonderful side dishes for goulash. But a simple slice of bread or noodles make a great side too.

In Germany goulash is always served with a veggie side like cabbage salad, carrot and peas or a German salad plate.

You can keep the goulash refrigerated for at least 3 days. The dish also freezes well.

Your favorite beer can be used to create a unique flavor twist on this dish.
Drink choice: for the best pairing, use the same beer that you used in the dish or serve sparkling Apfelschorle as a non-alcoholic drink. 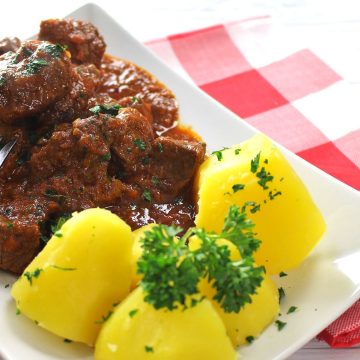