Konigsberger Klopse are small, delectable German meatballs in a creamy white sauce with capers that add a very unique flavor.

I'm not sure what it is about Königsberger Klopse, but they are seriously tasty and German comfort food at its best. There's something about the combination of the rich, flavorful meatballs and the creamy sweet-sour sauce that just works so well together.

Konigsberger Klopse is one of my all-time favorite meals. This dish holds a special place in my heart. It reminds me of the family dinners with my mom and Oma who needed to leave Königsberg during the second world war.

If you enjoy German comfort food, you should try beef rouladen, sauerbraten, or this Bavarian pork roast with dark beer sauce. Don't forget a delicious side dish like potato dumplings or spaetzle.

This dish originates from Königsberg, a former German city that became part of the Soviet Union after 1945 and is now called Kaliningrad. The German community that left the region during World War II took this recipe with them, and the dish was introduced throughout Germany, but especially in the Eastern part of Germany (formely GDR).

Konigsberger Klopse are tasty, small German meatballs cooked in a flavorful broth. They are served with a white creamy sweet-and-sour sauce flavored with capers. The sweet-sour sauce is the star of this recipe, and its flavor cannot be compared to any other dish.

How to pronounce "Königsberger Klopse" the correct way in German?

Listen to this audio file to hear how to say "Königsberger Klopse" the right way.

This dish's ingredients are mostly simple, but it's boosted by the addition of uncommon ingredients like anchovies and capers.

Every housewife has developed her own little twist on the recipe to suit the tastes of her family, so you might find minor differences in various recipes.

Meat: These German meatballs were originally made from finely chopped veal. Most recipes nowadays call for ground beef or a mixture of minced beef and pork, but ground turkey or chicken can also be used.

Anchovy Paste: Finely minced anchovies or anchovy paste are the meatballs' secret ingredient. Some recipes call for herring instead of anchovies. Your first reaction will most likely be discomfort with that ingredient, but I assure you that you will not taste the fish; it simply adds flavor to the meatballs. If you don't want to use anchovies in your meatballs, you can leave them out, as my mother did.

Capers: Capers give the dish a distinct flavor. Capers are typically added only to the sauce in most recipes. However, some recipes include chopped capers in the meat mixture. Capers in a jar can be found in most supermarkets near the pickled foods and vinegar. You could omit the capers if you don't like them or can't find them.

White Wine: White wine is not called for in the original recipe, and I do not use it in my traditional recipe. However, white wine is now sometimes included in modern versions of the recipe.

Heavy Cream: Full fat heavy cream adds a creamy texture to the sauce. Sour cream and creme fraiche are also used in some newer variations of Konigsberger Klopse. However, neither of these ingredients is used in the traditional recipe, and I believe that both of them significantly alter the original flavor.

Lemon Juice: Lemon juice adds a hint of brightness. If you don't have a fresh lemon, you can substitute with bottled lemon juice.

Egg Yolks: The egg yolks not only add a wonderful flavor to the sauce, but also a special richness and a velvety texture. In my opinion, egg yolks are one of the most important ingredients in this dish, and there is no real substitute for them.

Rolls: It's best to use rolls that are a few days old. You can substitute four slices of white bread for the two rolls. You might want to remove the crust.

Step 1: Cut the bread rolls into pieces and place them into a bowl with warm water. Allow to soak for 10–15 minutes. Step 2: Drain and press out the excess liquid. Add the bread to a large bowl and discard the water.

Step 3: Finely chop the onion and add them with the ground meat, eggs, bread crumbs, anchovy paste (optional), salt, and pepper to the large bowl. Knead the mixture with your hands until everything is well combined and smooth.

Step 4: Shape 16 meatballs and set them aside while you prep the cooking broth.

Step 6: Cut the onions into eighths and add them to the pot as well.

Step 7: Bring the mixture to a gentle simmer before adding the meatballs.
Simmer for 10 - 15 minutes on medium heat, or until fully cooked.

Step 8: Take the meatballs out of the liquid and set them aside. Take the liquid and strain it into a bowl. Take out the spices and discard them. You want to keep the onions and about 4 to 5 cups of the cooking liquid.

Step 9: Melt the butter in the pot over medium heat.

Step 10: Stir in the flour and cook over medium heat until it is lightly browned.

Step 11: Add about 3 cups of the cooking liquid and bring to a boil. Mix well to remove any lumps. Reduce the heat to medium-low and whisk in the heavy cream. Check that the liquid is no longer boiling. If the sauce is too thick, add more liquid.

Step 12: In a small mixing bowl, combine the egg yolks and sugar. To temper the egg yolks, add half a ladle of the sauce to the egg mixture, then add it to the pot and mix well.

Step 13: Drain the capers and keep the liquid. Add the capers, lemon juice, and vinegar to the pot. Season with 1-2 tbsp. of the caper liquid, salt and pepper to taste. Place the onions and the meatballs back into the sauce and allow them to sit for about 10 minutes before serving.

Not many kitchen tools are required to make this recipe.

You can store the meatballs in the sauce for up to 3 days in the fridge. Königsberger Klopse can be frozen in the sauce and reheated on low heat in a small sauce pan or the microwave. 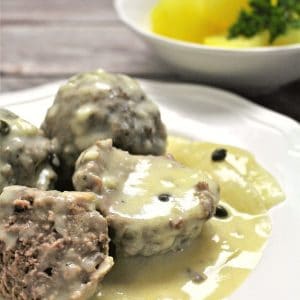 One portion consists of two meatballs with gravy. Make sure you don´t boil the sauce after you added the egg yolks, the sauce would separate.

Can you make Königsberger Klopse ahead?

The meatballs can be made ahead of time, but I recommend making the sauce on the day you intend to serve the dish. While reheating, the egg yolks in the sauce may separate. The sauce will still be safe, but it will lose some of its velvety texture.