Learn how to make German Hamburger patties. They are very popular in Germany and you will find them in rolls, with potato salad and mashed potatoes. Depending on the region they are called different names. In the south they are called Fleischküchle or Fleischpflanzerl, in the northern region they go with the names Frikadellen or Klopse. But no matter how you call them, they are very flavorful and can be eaten warm and cold.

Frikadellen are one of Germany´s most popular snack at the so called “Imbissbuden” which are old school fast food shacks. Every butcher serves them hot in a roll for a quick lunch but it will also be served regularly at German family meals and in German restaurants.

Traditionally German meatballs are made with ground beef or mixed ground beef and pork. You can also find variations with veal, fish, game or poultry.

How are German Meat Balls called in German?

Listen to this audio file to hear how to say "Frikadellen", "Buletten" and "Fleischküchle" in German.

It is unclear who invented the meatball aka meat patty. But it is known, that the Romans used a similar recipe for their “Lucan Sausages”.

German meatballs have many names, that are very different depending on the region. In Bayern “Fleischpflanzerl”, in Swabia and Franconia it is referred to as “Fleischküchle” or “Fleischküchla”. The people of Berlin call the flat pressed meatball “Bulette”, while other parts of Germany call it “Klops” or “Frikadelle”. 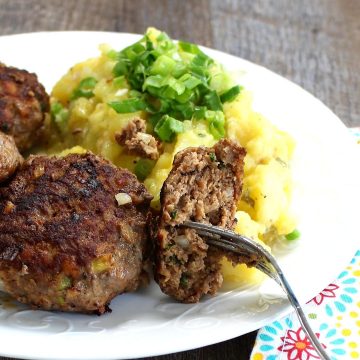 German meatballs are served in many different ways.

As a fast food German meatballs are often eaten in a crispy roll, similarly to a hamburger. But the Germans also love to eat their meatballs in cold slices and on a slice of fresh bread.

They are also served as a main meal at lunch or dinner time. Usually with mashed potatoes, potato salad, french fries, fried potatoes and a veggie or salad side.

Try this recipe with ground chicken or turkey. This is a leaner version of the German meatball and tastes amazing.