This easy German rahm sauce is the perfect cream gravy for your German meal because of its velvety texture and rich flavor.

You won't need more than a few basic ingredients to whip up this sauce quickly from scratch.

Rahm sauce is a classic of German cuisine. The sauce is especially popular in the south of Germany, where it is often served with spatzle and schnitzel or pork tenderloin.

What is the difference between rahm sauce and jager sauce.

The base for both sauces are similar. But jager sauce contains mushrooms while rahm sauce doesn´t.

How to pronounce rahm sauce in German?

Click on the play button to hear how to pronounce rahm sauce the correct way in German.

What does rahm sauce mean in German?

What is rahm sauce called in Germany?

The German name for rahm sauce is Rahmsoße or Rahmsauce. Soße is another word for sauce or gravy in the German language.

Like most gravies this sauce can be made with just a few simple ingredients that you probably already have at home.

Follow these easy step-by-step instructions to see how you can make German rahm sauce from scratch in just a few minutes.

Melt the butter in a small sauce pan over medium heat.

Add the flour and fry on medium heat for a couple of minutes.

Then add the tomato paste and fry for another couple of minutes.

Pour in the beef stock or vegetable broth and mix until everything is well combined.

Add the half & half and wine or water. Allow to simmer on medium heat until the sauce is smooth and thickened.

Adjust this recipe to your own preferences:

This basic sauce can be used as the base for several variations.

Making this sauce does not require a lot of equipment.

The sauce will keep refrigerated for at least 3-4 days. If you plan a meal, prepare the sauce the day before, this will save you time and stress.

Use ice cube trays to store any leftover sauce or double the recipe. You will have a nice supply of homemade gravy at your fingertips.

Make your own dark gravy sauce base and add a cube of it to this sauce to make it even more flavorful. 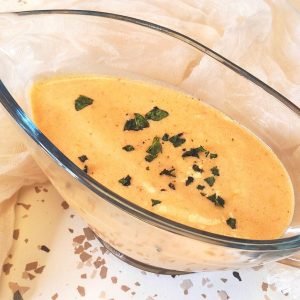