Jagerschnitzel is probably one of the most iconic German dishes. It's the ideal marriage of a great German schnitzel served with the most delectable mushroom gravy.

This classic German recipe features the authentic Jägerschitzel with brown mushroom gravy. Surprise your family and friends with this traditional German dish that tastes like it came from a cozy German Gasthaus.

All schnitzel variations are divinely delicious, but jager schnitzel is on the top of the popularity scale. There’s probably not a single person who visited Germany without having at least heard of the famous Jägerschnitzel.

However, not all jagerschnitzel in Germany are prepared in the same way. The traditional schnitzel dish comes in five varieties. Learn more about the jagerschnitzel varieties in the section "Cultural background."

In the western part of Germany, the famous pork dish is traditionally served with one of two varieties of German mushroom gravy for schnitzel. A brown mushroom sauce or a creamy mushroom gravy. In my opinion, both are equally delicious.

Each of these sauces can be served with either breaded pork cutlets or unbreaded pork chops. Schnitzel without breading has grown in popularity in Germany over the last few decades because it takes less time to prepare and contains fewer carbs and calories.

Jägerschnitzel is a completely different dish in the former GDR (East-Germany).
In the eastern part of Germany, this dish consists of a breaded slice of Jagdwurst (chasseur sausage) served with noodles and an aromatic tomato sauce.

What does jagerschnitzel mean in German?

"Jäger" is the German word for hunter and "Schnitzel" refers to a thin slice piece of meat.

How to pronounce Jägerschnitzel in German?

The Umlaut "ä" is pronounced like the American "a". Listen to the audio file to hear how to say Jägerschnitzel in German.

Pork cutlets are the traditional schnitzel base for this recipe. However, other types of meat can be used.

What Type of Meat Is Used For Jager Schnitzel?

Traditionally, boneless pork cutlets are used to make German pork schnitzel for this dish. However, bone-in pork chops can also be used. I love purchasing a whole pork loin and cutting my own pork cutlets. This is significantly less expensive, and you can cut the meat to the desired thickness. Check out this post to learn how to make the perfect German schnitzel: German Schnitzel - Authentic German Pork Schnitzel Recipe

Other meats can be served with the delicious jager sauce instead of the traditional pork schnitzel.

Pork Steaks - Grilled pork steaks are a delicious base for jager sauce.

Chicken - chicken breast makes an excellent breaded schnitzel. Cut the breast in half and pound to desired thickness.

Veal & Beef - all German schnitzel variations can also be made with thin slices of veal or beef.

Sausages - bratwurst and other sausages are a great alternative and quick dinner option.

Vegan & Vegetarian - The delicious jager gravy pairs well with tofu. Make sure to use vegetable broth instead of beef stock in the gravy recipe.

You only need a few basic ingredients to make authentic German jager sauce:

If you order a jagerschnitzel in Germany, you will either get a schnitzel served with a creamy or brown mushroom gravy. This recipe features the brown mushroom sauce version of jager sauce. You can find the recipe for creamy hunter sauce here.

Bacon Mushroom Gravy: Some traditional German recipes call for bacon in the gravy, while others do not. This recipe does not include bacon, but if you enjoy it, you can add it. Tips for adding bacon can be found in the instructions below.

This brown jager mushroom sauce is very simple to prepare. Follow these easy recipe steps to impress your friends and family with a delicious, authentic German sauce.

Step 1: Using a damp kitchen towel, clean the mushrooms. Remove the stems and cut them into ¼-inch wide slices.

Heat the vegetable oil in a non-stick frying pan and fry the mushrooms in batches until golden brown but still firm.

Step 2: Set the mushrooms away and melt butter in the same pan. Chop the onion and fry it in the butter over medium heat until translucent.

Step 3: Add tomato paste and fry for a couple of minutes with the onions and then stir in the flour.

Step 5: Season with salt, pepper, paprika powder, thyme, and Worcestershire sauce and allow to simmer for 5 – 10 minutes on medium heat.

Step 6: Allow to simmer for 5 minutes, or until the mushrooms are soft to the bite.

Bacon: If you love bacon, include some. It will be delicious! Chop about 3.5 oz. of bacon into small cubes and fry them with the onions in step 2.

What Type of Mushrooms Are Used For Jager Gravy?

For a simple quick sauce I love to use brown cremini mushrooms. But you can also use white champignons.

A fancier version with chanterelles or a variety of fresh mushrooms is also delicious.
This will elevate this jager sauce to the level of Gourmet Jägerschnitzel found in Germany's star-rated restaurants.

Give Your Gravy a Gourmet Upgrade

I use 4 cubes of dark sauce base plus ¼ cup red wine and ⅛th cup port wine to make an even richer and more indulgent version of this brown jaeger gravy.

Making German schnitzel with a Jägersauce requires only a few simple kitchen tools that you most likely already have.

German schnitzel is best served immediately after frying, but it can be refrigerated for up to two days. Leftovers are great for sandwiches and can be eaten hot or cold.

Reheat breaded pork cutlets in a little butter over medium heat. The breading tends to become soggy when reheated in the microwave.

The sauce can be refrigerated for up to three days. Leftover sauce is delicious with noodles, rice or potatoes and can be served on its own or with sausages or other meat dishes.

This dish is traditionally served with spatzle or frensch fries. However, Swabian potato salad, boiled potatoes, and kroketten are also popular side dishes.

There are virtually no sides that do not complement the delicious schnitzel specialty. This dish pairs also well with potato dumplings, bread dumplings, rice or even with just a slice of homemade German potato bread.

In Germany, an entree is usually served with more than just a starchy side. Typically, the dish will include a vegetable or salad side. This carrot and pea side dish or a German salad platter are my favorites, but you can also make just a simple side salad. 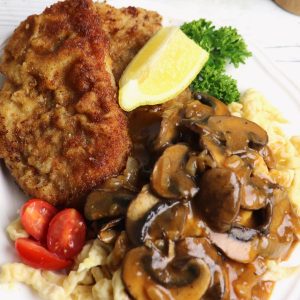 I use 4 cubes of dark sauce base plus ¼ cup red wine and ⅛ cup port wine to make an even richer and more indulgent version of this brown jager gravy.

What's the difference between schnitzel and jagerschnitzel?

What is Jagerschnitzel made of?


The widely known jagerschnitzel is a breaded pork cutlet served with either a brown mushroom sauce or a creamy mushroom gravy. A fried slice of breaded chasseur sausage served with a fruity tomato sauce is a lesser-known east German version of jagerschnitzel.