The whole world loves great German schnitzels. The thin pounded, breaded cutlet is so popular because it is comfort food at its best.

German schnitzels are not only popular at Oktoberfest but all year long. Let me show you how to make an authentic German schnitzel and which German side dishes are traditionally served with this amazing meat dish.

What is a German Schnitzel?

Most of you are probably familiar with schnitzel, but here is a brief explanation in case you are not.

A schnitzel is a traditional German dish in which meat is pounded and fried in a pan.
Breaded schnitzels are the most popular, but there are many dishes that use unbreaded schnitzel as well.

Schnitzels are often eaten plain with a squeeze of fresh lemon juice, but they can also be served with a signature gravy. Some of the most famous variations that are served with a schnitzel sauce are Jager Schnitzel, Rahm Schnitzel, and Gypsy Schnitzel. But there are dozens of types of schnitzel recipes.

One of the most famous schnitzels is the Austrian Wiener Schnitzel. Wiener Schnitzel also known as Vienna Schnitzel means cutlet Viennese style. The name “Wiener Schnitzel” is a protected term in Europe and can be only used for dishes consisting of a thin pounded slice of breaded veal which is fried golden-brown. Traditionally a generous amount of pork lard is used for the pan-frying process.

One thing all schnitzel variation have in common – they are an all-time crowd pleaser for a simple family meal as well as for a festive event.

The breaded schnitzel has its origins in the 9th century in the court of the Eastern Roman Emperor in Byzantium.

Emperor Basil was a gourmet, and because his servants adored him, they presented him with "golden meat," delicate pieces of meat covered in gold leaves.
Because gold was extremely expensive for the regular citizens, resourceful cooks encased the meat in golden fried bread crumbs instead — the breaded schnitzel was born.

During the 17th century, the German terms "schnitzel" or "schnitzlein" were already used to refer to meat slices the size of a palm.

How is schnitzel called in German?

Schnitzel is a German word and therefore Germans call schnitzel Schnitzel (n). Listen how the word Schnitzel is pronounced in German.

To prepare authentic German schnitzel, you need only a few basic ingredients:

Learn how to make a traditional German schnitzel from scratch by following these simple instructions.

Rinse the pork chops and pat them dry with a paper towel. Pound the meat to about ¼-inch thickness between two layers of plastic wrap.

Brush both sides of the schnitzels with the marinade.

Add flour and bread crumbs each to a deep plate. Whisk together the milk and egg in a third deep plate.

Melt lard and butter in a large skillet over medium-high heat. Fry the schnitzels on both sides until golden brown.

Hint: After frying the schnitzels, transfer them to a paper towel-lined plate to drain the excess fat.

What Meat Should You Choose For German Pork Schnitzel?

Because they are marbled with fine fat veins, pork cutlets from the leg of the pig make particularly juicy schnitzel.

The loin meat, on the other hand, is ideal for creating uniform escalopes. However, when fried, such cutlets can dry out more quickly. Make sure to not overcook them.

How To Make A Large Schnitzel?

Pork cutlets sold in US supermarkets are quite often small and thin.
With this little trick, you can make a large pork schnitzel like the ones served in a German Gasthaus.

Purchase a pork roast from the leg or a whole loin and cut the meat into 1-inch wide slices before butterfly cutting it lengthwise. Then pound the meat to the desired thickness.

Chicken - Chicken breast makes an excellent breaded schnitzel. Cut the breast in half and pound to desired thickness.

Veal & Beef - You can also use thin slices of veal or beef for all German schnitzel variations.

Change the flavor profile with these ideas:

If you want to serve your schnitzel like in Germany. Add the following traditional garnishes:

German schnitzel is best served immediately after frying, but it can be stored in the refrigerator for a day or two.

Fried pork schnitzel also tastes great cut into slices as a sandwich. For re-heating, I don´t recommend the microwave. Rather, re-heat the schnitzel in a skillet with butter on medium heat or in the air fryer.

If you would like to serve a large amount of freshly fried schnitzel, it is best to bread them ahead of time. You can store them breaded in the fridge for up to 24 hours before frying. 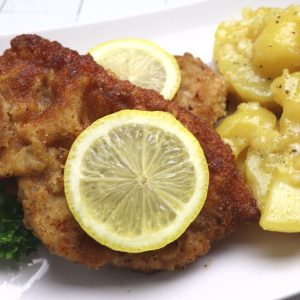 Serve with french fries, spätzle and a side salad or a vegetable dish. Add some of the famous German schnitzel sauces, like Jäger gravy, creamy sauce or gypsy sauce.