One of the most internationally famous German dishes are roasted pork shanks. They're meaty, flavorful, with an amazing crispy skin - everything that makes a pork dish so delicious.

Here's a recipe that will show you how to make the most of this tasty cut of meat.

“Schweinshaxe” or “Haxe”, how the Bavarian call it is since the end of the 19th century a typical regional dish in the Bavarian and Austrian cuisine.

The term “Haxe” probably comes from the Old High German word “hahsina”, which means “Achilles tendon” or some think it could also derive from Latin: “coxa” which means hip.

“Schweinshaxe” is a quintessential dish for every Oktoberfest celebration and a tasty classic of Bavarian food choices. You are sure to find it at all the beer tents at the famous Oktoberfest in Munich.

How to pronounce "Schweinshaxe"?

Listen to this audio file to hear how to say "Schweinshaxe".

With my recipe you can make a tender and juicy pork shank wrapped in a crispy skin just like the ones you will get served in Germany. It makes the perfect pairing with a big stein of your favorite beer.

What Kind of Meat?

There is no difference between a pork hock or pork knuckle. These are just various names for the joint at the bottom of the pig´s shank where the foot is attached. It all refers to the meaty part just above the ankle of the pig´s leg. The knuckle is located between the "knee" and foot of the hind legs of the pig. The meat is heavily marbled and surrounded by a strong layer of fat. One Pork knuckle usually serves one or two people.

Often the term shank and hock/knuckle is used interchangeably. However, there is a difference. Pork shanks are cut a little higher above than the hocks and are therefore wider. The cut comes from the part above the foot and below the ham. Shanks have more meat and can serve, depending on the cut, up to four people. Be aware that this will also extend the cooking time. The bone marrow of the pork shank is considered a delicacy; however, it is very small.

You can also find so called ham hocks in supermarkets and at the butcher. But even these are the same part of the pig like a hock, they can not be used for this dish as they are usually already smoked and cured.

I recommended to precook the pork knuckle in water or broth first. On the one hand, to get it cooked without burning, but also that the skin becomes soft. This allows you to easily score the skin before roasting and broiling which results in a nice crispy, crust during.

To cut the fat layer use a sharp knife. An unused, clean box cutter is the easiest way to work the thick pork skin. The skin is cut from top to bottom in a diamond shape. This allows the fat to fry in springy crisps and the spices to soak in more easily.

I use dark beer or broth to baste the meat during the roasting process. This gives the meat a hearty, aromatic flavor. During roasting, the pork shank is repeatedly doused with the beer and/or broth. You can make an easy sauce, if you pour the remaining liquid through a sieve right into a sauce pan. Allow to simmer until it is natural thickened.

This pork shank recipe shows you how to roast a pork shank in your oven. It is one of the easiest methods to achieve tender meat and the perfect crispy skin.

If you prefer soft, uncrispy skin braised in gravy you probably want to choose a recipe for a braised pork shank like the ones from Guy Grocery Games or Food Network Kitchen´s. This will result more in an Osso Buco style pork dish. I personally prefer the crispy skin recipe for pork shanks but love braised lamb shanks.

Step 1: Chop the onion and garlic cloves coarsely. Bring water, onions, garlic, and spices to a boil in a large pot.

Step 2: Place the pork shank in the pot and cook for 1 hour, covered, on medium heat. Preheat the oven to 350 degrees Fahrenheit.

Step 3: Remove the pork shank from the pot and place it on a roasting pan's rack. Pour half a bottle of beer and about a cup of cooking water into the pan's bottom.

In a diagonal pattern, cut the rind of the pork shank. (To see how to do this, watch the video tutorial). Roast the pork shank for 45-60 minutes, or until golden brown and crispy. While roasting, baste with the remaining beer a few times.

This traditional recipe for Oktoberfest style pork knuckles is known far beyond the borders of Germany. This is how the crispy pork shank succeeds for sure.

What to Serve With?

If you want to serve a gravy with your crispy pork shank, add onions, carrots and a small piece of celery. Cut all vegetables into large cubes and spread them around the shank in the roaster. Pour enough water so that it is about 2 centimeters high in the roaster. Add the liquid and vegetables to a mixer and finely puree everything to a smooth consistency. Salt and pepper to taste and you will have a simple but very flavorful gravy that you can make in just a few minutes without any thickeners.

What to drink with roasted pork shanks? This delicious dish naturally calls for a great German beer like Weihenstephaner or Erdinger beer. You can find German beer at big liquor stores locally, online and your German delis. A good glass of heavy red wine also accompanies this dish very well.

What to Do With Leftovers?

In case you have some leftovers, you can use the meat to make an awesome sandwich or cut the meat into small cubes and make a "Gröschtl". This mazing Bavarian/Austrian dish is made with bread dumplings and meat leftovers. 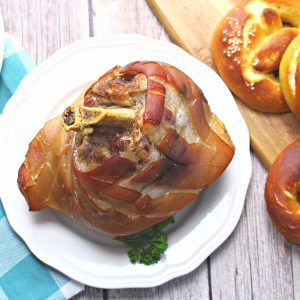 Everything Else You Need to Know

Where to buy pork shanks?

The meat is heavily marbled and surrounded by a strong layer of fat. The right cooking method makes sure that the meat will be tender and juicy with a delicious crispy skin.